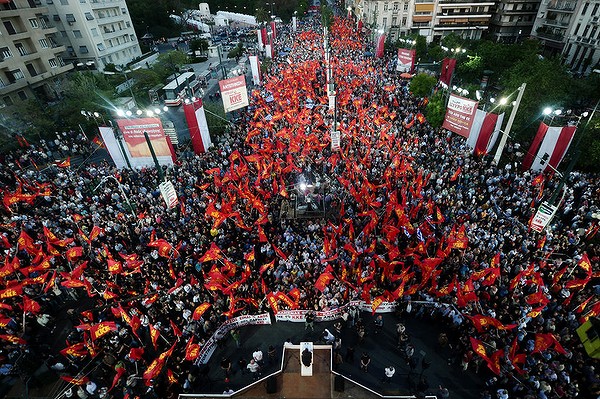 “Revista Opera” Interview with G. Marinos, MP and member of the PB of the KKE

1 – How do you see the recent election of Syriza? Will they be able to solve Greece’s workers needs?

In our assessment, the replacement of the ND-PASOK government by the SYRIZA-ANEL one can not help satisfy the people’s needs today. And this is because the new government, like the previous one, despite its “leftwing” sloganeering operates within the same framework: the country’s participation in the EU and NATO, the implementation of the commitments to these imperialist unions, the recognition of the unbearable state debt that the people are not responsible for, the support for the profitability of the capitalist interests in the name of the “competitiveness of the national economy”.

So the new government’s program is simply seeking to manage the phenomena of extreme poverty, while at the same time the unbearable situation will continue for the majority of the people, as the causes of the people’s problems will remain in place. These causes are to be found in the very nature of capitalism.

2 – Has KKE offered Syriza an alliance? If so, which were the conditions for the agreement?

Life has demonstrated that crudely assembled coalitions of parties in the name of the left and intentions to better manage capitalism do not serve the workers. The experience in Greece and internationally, in our assessment, demonstrates that “centre-left”, “progressive”, “leftwing” governments in the framework of capitalism (e.g. in Italy, France, Cyprus, Brazil etc.) also took anti-people measures, were not able to avoid the consequences of the capitalist crisis and actively participated in imperialist wars. Such governments exacerbated the disillusionment amongst the workers, weakened the labour movement and in each case constituted a “bridge” to more rightwing policies.

Our party in a very timely manner had excluded the possibility of participating in or supporting a “leftwing” government of SYRIZA, which promises that there can be a pro-people management inside the framework of capitalism and the imperialist unions. On our part, we did not participate in the spreading of such illusions by placing some “conditions” on SYRIZA, because it is obvious that we have a diametrically different approach: SYRIZA seeks the humanization of capitalism, the KKE seeks its overthrow and the construction of another society. However, we promoted our political proposal, which in brief provides for the following: unilateral cancellation of the debt, disengagement from the EU and NATO, socialization of the means of production, central planning of the economy, workers’-people’s power.

I should note that the KKE has its own view about what type of alliances the country needs. We have charted the line of forming the people’s alliance, comprised of social forces, the working class, the poor and medium sized farmers, the urban petty bourgeois strata, whose interests lie in coming into conflict with the monopolies and capitalism. This alliance, which today has taken its first steps, is struggling for every problem the people have, has an antimonopoly-anticapitalist direction and contributes to the concentration of forces in order to pave the way for the construction of the new socialist-communist society.

3 – Syriza has recently made an agreement with the right-wing party “Independent Greeks”. How do you see that? Was it necessary? Why?

It did not surprise us. Before the elections we had assessed that SYRIZA, if it did not achieve an absolute majority in the Parliament, would form a government with one of the parties that like SYRIZA want Greece to stay inside the EU and NATO. We are talking about the parties that consider that the people should pay for the unbearable debt for which they are not responsible and that support the capitalist path of development. Although there were other bourgeois parties, of various shades, that were eager to collaborate with SYRIZA in the government. SYRIZA chose cooperation with ANEL, a cooperation that had started some time ago.

4 – It seems that Syriza won’t fight EU and US sanctions against Russia. They’ve supported the extent of it last Thursday. What is KKE’s view on that matter?

The government’s stance on the issue of Ukraine, despite the blustering, lasted just 3 days. On the fourth day, the Greek government aligned with the EU and voted for the same sanctions against Russia that had been voted for by the previous ND-PASOK government, leaving the door open for other sanctions in the near future. We should note that it had criticized the stance of the previous government on this issue.

In our evaluation, the sanctions against Russia signify the escalation of the intervention of the EU and the USA in Ukraine, in the framework of their competition with Russia over the control of the markets and the region’s energy resources.

The trade war between the EU and Russia above all is harming the working class and popular strata, such as the small and medium farmers in Greece. This is a trade war that aims to benefit the interests of the monopolies.

The new decision of the EU, with the participation of the Greek left as well, confirms once again the reactionary imperialist character of the EU, which attacks the peoples of Europe and plays a leading role in imperialist plans in order to serve the interests of EU-based capital.

The KKE consistently argues that the Greek people must denounce the stance of the Greek government and demand that there should be no Greek participation in the EU and NATO plans.

5 – We’ve seen the growth of fascist and neonazi organizations throughout Europe. In Greece, there’s Golden Dawn. On last elections they’ve got aroung 6% of the votes. If Syriza fails to solve Greece’s problems, will Golden Dawn grow?

It is true that the criminal Nazi party Golden Dawn, which has murderous activity and was created by the mechanisms of the system, maintains a high percentage in elections, despite the losses it had in votes.

Particular responsibility for the electoral percentage of GD belongs both to the ND-PASOK government that fostered anti-communisms, the theory of the two extremes, the scape-goating of immigrants as well as to the blurred “anti-memorandum” line promoted by SYRIZA which exonerates the people’s real opponents, the capitalists. This specific criminal fascist organization developed on this ideological and political terrain.

The KKE remains the steadfast opponent of fascism, precisely because the KKE opposes capitalism as a whole, the system that creates fascism, nationalism and racism.

The frustration of the expectations which have been cultivated by social-democratic forces, like SYRIZA, can facilitate the activity of Golden Dawn amongst politically backward sections of the people. However, we assess that our people have the strength to reject and isolate the criminal Nazi activity and ideology of Golden Dawn. They possess the historical experience and memory from the 2nd World War, from the Anti-fascist Victory. It is a duty and a necessity, especially in the case of the youth and schools, for teachers and for artists and scientists in society more generally to expose, to fight against and to impede the poison of fascism-Nazism. The labour and people’s movement must strengthen its struggle against Nazism and its criminal activity, against the system and the interests that create and sustain such formations.

Giorgos Marinos is a commercial navy telegrapher by profession.

Source: In Defence of Greek Workers