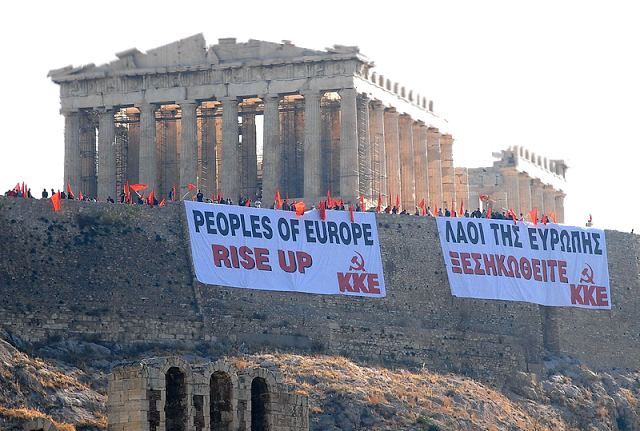 This path was predetermined

The propaganda machine of the coalition government is working feverishly to dampen the opposition between the group of workers, the popular strata, who believed that SYRIZA can open a different path for the benefit of the working – popular interests.

Thus we have come to read these days that the balance of powers is negative and had been underestimated by the government, that the main problem and goal is to avoid the fall of the government and therefore every compromise is necessary; and after all the agreement (the new unpopular Memorandum) that is promoted is better than a possible catastrophic Grexit and, in any case, it is not such a “bad” agreement.

This effort was expected and rather detrimental. It is not the first time in history that a “left” social democratic party assumes administration with promises of relief for the people but implements policies in the opposite direction. Something is always in the way, the balance of power, bad timing etc., that does not permit immediate actions to implement pre-election promises.

However reality is very different. This path was predetermined.

The so called election program, disguised with radical slogans, included, besides vague promises for a few crumbs to the people, important commitments to Capital, business groups to support the recovery of profitability (the so called growth).

To achieve this goal, the SYRIZA – ANEL coalition negotiated all these months, trying to secure better terms, hoped for the possibility of relaxing the fiscal budget through another mixture of capitalist management and the restrictive EU objective, that were promoted by other EU countries as well (eg . France and Italy) and which the US supported.

However the possibility of whether the mixture of capitalist management is changing or not and if it is to which direction, is determined by the situation in the capitalist economy in each state, at EU level, and also in connection with other international developments. For the capitalist economy things are not looking well. Therefore, vigorous fiscal policy, restrictive measures have been proved a one way road. Even more so since forces in the EU where amplified, led by part of the German Capital, that pursue a more rigorous framework for Eurozone to function for shielding its interests. These developments, therefore, confirm that the idea of changing the EU and the Eurozone towards a working class interest direction was a drivel.

The balance of power, therefore, is negative by both sides: The balance of power is negative for the interests of the working – popular masses, first of all, because Greek Capital, Greek business groups are the ones that benefit from the crushing of the workers’ – popular strata. The balance of powers, however, is specific and on the position of the Greek state in the negotiations. The Greek state, the Greek Capital has a specific intermediate position in the imperialist system. It is therefore obliged to reconcile with powerful capitalist states such as Germany. Simply put, Capital has the ability to load the impact of this inequity to workers. This truth was known and is evident that SYRIZA did not discover it after the elections.

A government therefore that becomes an instrument of the power of the monopolies, which aims to capitalist development, which is bound by its participation in imperialist associations, alliances such as the EU, NATO, etc. is obliged to follow a predictable course, the “logic of the economy”, as the president of the Industrialists Federation said when he was stating before the elections that he is not concerned about the next government.

It is therefore important for workers who out of good will believed, once again, in a dead end street, instead of being dissapointed, instead of letting this to lead them to resign or seek new deadlock chimeras, to realize that another road, that another intermediate or transitional step besides rupture with the EU and all imperialist alliances, capital, business clusters and their state power can not be for the benefit of the people. A road, which will not serve bourgeois government changes, but a workers’ – popular movement, a popular alliance in an anti-capitalist, anti-monopoly direction and will be a fight for workers’ power.